What are the Different Types of Motors?

One of the closest upcoming Robocup event in near future is the Sydney Robocup event which is to be held on 2-8 July in Sydney, Australia. The exact location of this event will be at the International Convention Center in Darling Harbour, Australia’s premier integrated convention, exhibition and entertainment precinct.  This competition has different leagues, the major leagues and the junior leagues, hence we will take a brief look at different leagues, their rules, and the participants of this Robocup event.

First of all, the important dates for this event are as follow: 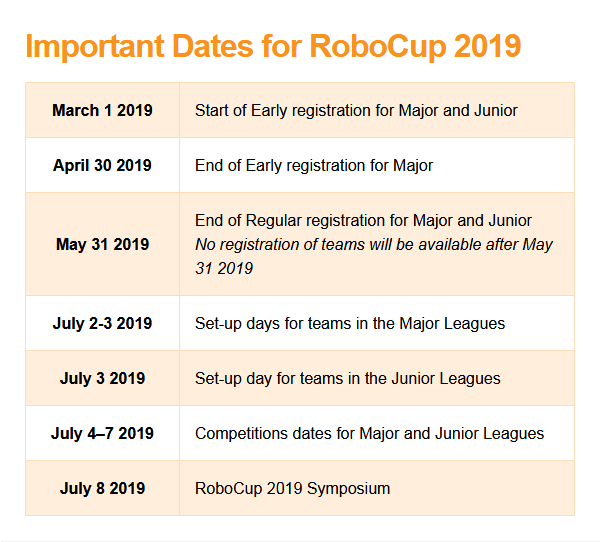 The event will begin from 2 July with teams’ set-up and will end with the Symposium on July 8.

Here we have an introduction to what happens in each league or sub-league:

Soccer league, itself  has  5 different sub-leagues, each of which with its own rules and methods. Here we will have a brief introduction to them.

A Small Size League game is played between two teams of six robots each. The robots must be no larger than 18 cm in diameter and no higher than 15 cm. the game is in a green carpet field, which is 9m long and 6m wide. The game uses an orange golf ball. Information provided by a vision system incorporating four cameras installed above the field and judgments made by the referee are sent to the two competing teams. Using these sets of information, the robots communicate with one another via a wireless system so as to play the game autonomously and strategically.Speedy movements and collaborative plays make the Small Size League so attractive. If you are a fan of soccer games, this League would be a smart choice for you.

As the name suggests the difference between Small Size and Middle Size League is related to the group size and the robots size. In the Middle Size League are two teams of five autonomous robots each, within a 52 cm square in length and width and no higher than 80 cm, compete in soccer games. The playing field is a green carpet, a maximum of 14 m by 22 m. A Middle Size League game uses the same size 5 ball as is used in human soccer games, whose color is specified before the competition. Sensors, including cameras, and computers used for movements are mounted on each robot. The robots play the game strategically, sharing positional information with the other robots. Certainly the most attractive feature of this League are the powerful movements.

This League has three sub-leagues according to the robot size. The robots of each sub-league must walk on two legs. One challenge for them is to move and kick the ball accurately. The obvious thing is that the robots cannot move as briskly as humans, but their abilities to maintain balance while walking and kicking, and to recognize surrounding robots and the field, as well as the team strategies and other technical features, are improving year by year. This League goal is to make a substantial contribution to the evolution of important technologies for the future development of humanoids. 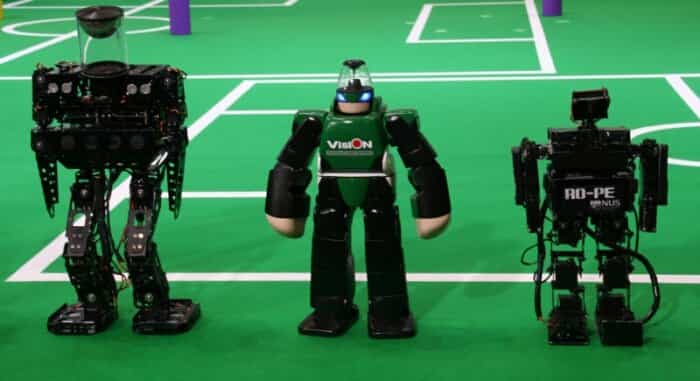 The Standard Platform League holds soccer games using only the same model of robot, the NAO communication robot (approximately 58 cm tall) from SoftBank Robotics (each team comprising five robots). Each team participates in the game under almost uniform hardware conditions. The limited movements of the robots are due to the fact that these robots are not specifically designed to play soccer. The robots communicate with each other, with each one playing the game making autonomous decisions. The spectators enjoy many aspects of the match, letting out a cheer simply at a successful pass and smiling at cute robots taking a tumble when some distance away from the ball.

The Simulation League uses a video display to run soccer games without the use of real robots, consequently it resembles a video game. The match is played between autonomous systems rather than human players. Simulation League competitions are therefore sometimes called matches pitting AI against AI.

The game is performed on a server called a SoccerServer, while eleven players compete against eleven players. Using virtual sensors, each player receives inputs of data such as its surrounding situation and the position of the ball in order to act.

For this League three robots are used, that must move collaboratively between processing machines.

According to the Industry 4.0 the Smart Factory will be a place where human workers are assisted by mobile robots, or mobile manipulators, equipped with industrial robot arms. Keeping in mind such an image the competitors must compete in RoboCup@work League, therefore robot arms built on a mobile mechanism incorporating wheels or similar parts detect and collect parts and transport them to their destinations.

In the Rescue Robot League, the goal is finding victims. So that several victims are placed in a simulated field of a disaster site and the robots have to find them and rescue them. The robots have two mechanisms; they can either be in operator control mode or autonomous operation mode. They are also equipped with devices such as a camera, a temperature sensor, and a carbon dioxide sensor. Various factors can affect the score, for example the number of obstacles the robot overcomes, the number of victims it finds, and the number of operators involved.

The Rescue Simulation League holds simulator-based rescue competitions, simulating a major disaster that has occurred in an urban area built on a computer. The competition requires players to deploy rescue, fire-fighting, and road patrol teams called “agents”, so they would search for and rescue people in need of help.

In the @Home League the robots compete to see who can be helpful for human life, that means which robot can perform operations in a domestic environment such as a living room or a kitchen using an everyday robot utilization scenario. Important technologies in the competition include robot arm control and manipulation, such as for opening and closing doors and holding objects. Another important ability is establishment of naturalistic robot-human communication.

In this League the teams must perform on stage. The teams have 1 to 2 minutes to have a robotic performance using technology to engage an audience. The aim of this League is to check the creativity and artistic sense in particular. One or more robots must come to the scene, together with humans, while wearing costumes and perform in a creative, interactive and collaborative sense.

Keep in mind that: No major team can register for this Robocup event after May 31, 2019.

The Junior League has  3 different sub-leagues, the Soccer League, The Rescue League, and the On Stage League. Here we try to give a short introduction toward each League:

As the name represents this League is again a soccer match between two teams each of which has two players. Although this time the students must design, build, and program two robots and play against another couple of another team.

The Robots compete by following a winding line on a series of tiles to a designated rescue area. The challenging part is on the way toward rescue area. It’s on this way that the robots will face obstacles, bridges, and short cut opportunities. First of all the path is selected randomly and then the robot goes through it. Finally it arrives at a green colored area which indicates a chemical spill, while the clock is still ticking the robot must find “the victim” before pushing them out of the quicksand to safety.

For this League a rescue mission is necessary to enter a maze, in which a dangerous disaster has occurred. Since the  humans cannot enter there, a fully autonomous robot enters into the hazardous maze. The robot must locate heated victims so that the humans know where they are. A rescue package needs to be dropped for the humans that will locate them and keep them alive, ‘water’ etc. (note: simulated).

*Notice that the early registration deadline of this Robocup event is over.

Finally if you want to take part in this Robocup event, and you need to make your Robot, here we are to help you.

We suggest our dependable tools for your team.

If you want to be the best you must choose the best.